Signs Your Car May Have Electrical Issues

Tricky Transport: The Most Interesting Ways to Move Cars

Electrical issues can be frustrating for motorists, especially when the car’s battery doesn’t seem to be the culprit. In older vehicles, the battery is most likely the cause of any electrical issues. However, newer cars often have a complicated and extensive electrical system. While advancements in automotive technology make driving more comfortable and safer for a majority of motorists, they also have more potential for failure due to their complexity. Modern vehicles are much more reliant on their electrical systems than older cars. If the alternator, battery, or other components of the electrical system start to fail, motorists often experience a wide range of issues.

It’s easy to misdiagnose electrical issues in any vehicle, but here are a few common symptoms of electrical troubles to watch out for.

The car’s engine requires electrical power to start. The battery provides a spark that ignites a fuel mixture in the engine. If the engine doesn’t start correctly, this may be a sign of a bad battery. However, it could also indicate an issue with the alternator or some other unrelated electrical problem.

The most common sign of electrical issues within the vehicle is a clicking noise upon attempted ignition. When the clicking occurs, the car doesn’t have enough current flow in its electrical system to start the engine. Usually, this means that the car’s battery has lost its charge or is at the end of its useful life. However, this could also indicate an issue with the alternator or the starter.

If the car makes grinding noises upon startup, this may mean there’s an issue with the starter or a failing flywheel ring gear.

High-mileage vehicles are more likely to have issues with their electrical systems. Make sure to have the car looked at by a reputable auto mechanic if the car has any electrical-seeming matters on startup.

A discharged or dead battery is an obvious electrical problem. However, don’t just replace the battery without checking other possible electrical issues in the vehicle. Car batteries last about five years, so it may need replacing. A problem with the alternator could also be at fault.

Check the battery cables for corrosion and make sure that they are correctly connected. If the car doesn’t start, consider taking the battery into a local auto repair shop to check its functionality. If the repair shop concludes the battery works well, the issue may be somewhere else in the car’s electrical system. The next step is to check the alternator and other common problem areas for the vehicle.

Headlights and Other Lights Malfunctioning

The lights are critical to the safe operation of a car. Turn signals, brake lights, and headlights help motorists communicate with each other and keep drivers safe on the road. Interior lights ensure drivers can find what they need to at night or in other poorly-lit conditions.

If the vehicle’s electrical system malfunctions, drivers may notice that the lights start to dim. Dimming lights typically indicate low system voltage or a charging failure with the battery. However, loose wires or a malfunctioning alternator belt could also be to blame.

Another problem that causes light issues with the vehicle is corrosion. Most reputable auto repair shops should be able to test the car’s electrical system with a voltmeter. 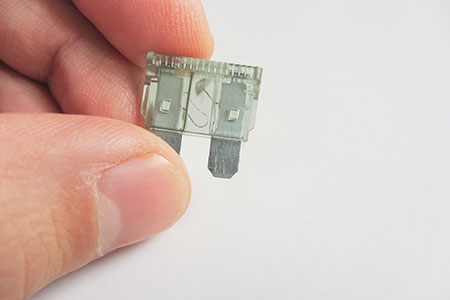 Fuse boxes are meant to prevent short-circuiting and overvoltages. A fuse breaks the circuit to protect fragile electrical components from drawing too much current. Sometimes fuses blow for indiscernible reasons. However, if the vehicle’s fuses are constantly blowing out, then this may mean the car is having severe electrical issues. If a fuse needs replacing more than once in a short time, make sure to take the vehicle to a professional mechanic. If a short-circuit or electrical fault is the problem, leaving it too long will result in further damage to the vehicle.

If the car exhibits any of the above electrical symptoms along with a burning plastic or burning electrical insulation smell, stop driving immediately. Get the car towed to an auto repair shop. Driving the vehicle with an electrical issue will almost inevitably result in further damage to the vehicle and could result in bodily harm if the car stops working entirely while in use.

As mentioned before, it can be pretty challenging to diagnose electrical problems in modern vehicles. Ultimately, the car needs to be inspected by an experienced technician, but there are a few things to remember if attempting to figure out the problem beforehand. Every circuit in the vehicle needs a power source and must be continuous. Additionally, most electrical devices in the car require a minimum voltage to work correctly.

If the vehicle is a hybrid, make sure to avoid direct contact with the battery and any wiring to prevent the risk of shock. Additionally, if the car’s electrical issues are significant, there’s a risk of fire when working on the problem.

How Can We Help?

Here at Federal Way Automotive and Radiator, we have decades of combined automotive experience. We provide free estimates, and we are dedicated to quality customer service. We care about our customers’ safety, and we know how stressful car troubles can be. If the family vehicle is exhibiting electrical issues, bring it to us here in Federal Way, Washington. We have access to all of the latest scanning technology and voltmeters and employ skilled diagnostic technicians. Call today for an appointment!